Freecell is a fantastic game. Most people simply play the game until all the cards are played and they have “won” the game. The best player I have ever known is my cousin John Lidderdale, in England. His best streak was 263 straight games without a loss.(His win/loss is 97%). (The google site puts this streak to shame!) Because I play a different version, my win loss is horrible (as mentioned above), but there are two reasons: One is, when I get stuck I replay and replay a game until I have beaten it. The second reason for my lousy score is I’m playing Tournament Freecell. This is a version where you score each game. Here are the basic rules: 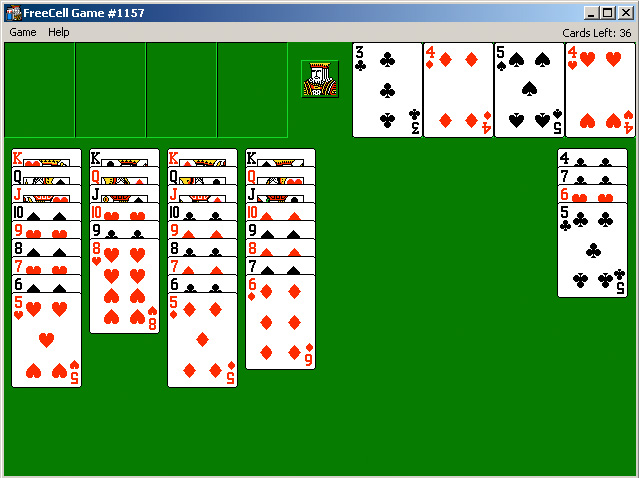 For instance, here is a game on the last play.
The next move would be the player to move the 7-6-5 on top of the 8♥, the 4♣ would automatically be played onto the 3♣, and the game would end. So this is paused at the last move.

Here’s an example of a straight: (It is possible to manipulate this hand to make it a
straight flush with all clubs.) 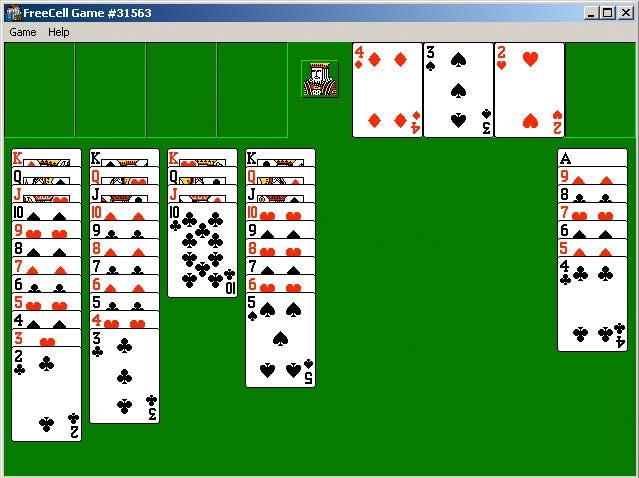 I would like our expert to determine the following. 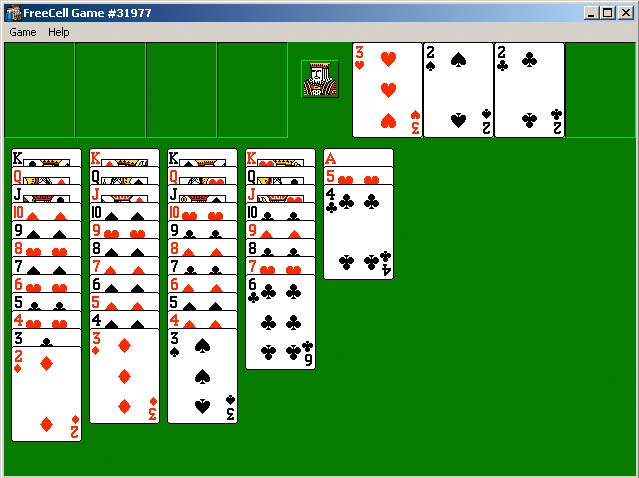 I have answered that second question with a ‘YES’. Game #150 can be played without putting a card in the four FreeCell cells on the left. No score, but no cards in the cells.

I think these should be an automatic win, if possible. (9 points???)

Here are some more examples of end of hands: 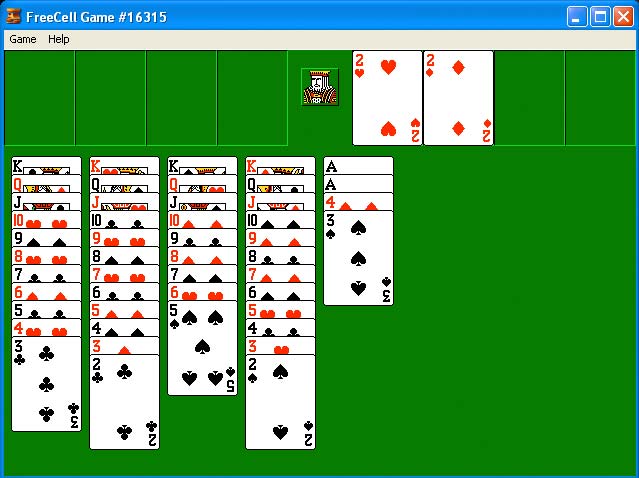 SOME THOUGHTS ABOUT STRATEGY

It will be apparent, after only a few games, that completing the game (i.e. getting all the cards out on the four aces) is at cross-purposes to getting a low score. The more cards that are out, the higher (worse) your score will be.

On the other hand, the fewer cards out the lower your score will be. But that means you have to manipulate the maximum number of cards. And that is the challenge! To work with all the cards out to a conclusion.

You can predict the possible outcome by looking at the cards as they are dealt. For instance look at this dealt hand: 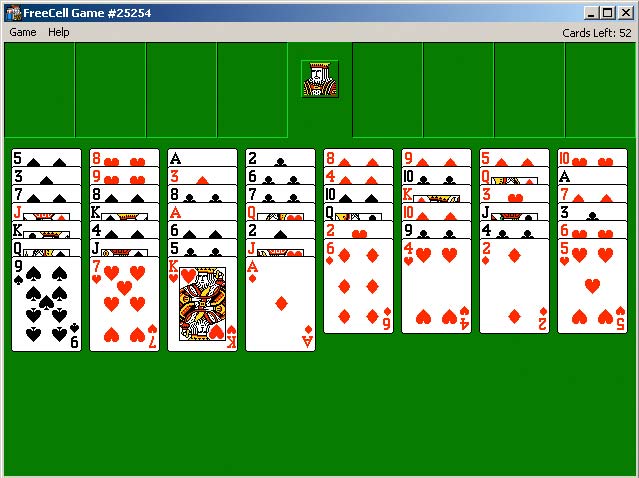 You will note, in the third column, that the top card is a covered Ace. If you can keep that card covered, and not have to put out very many other cards, you will have a very low score (11).

It also means that the four columns will automatically be placed on the right because that Ace is in one of the left columns.

On the other hand, you cannot have an Ace covered by a King because, by the time you have completed that King column (and, for a low score, that column will be very long) you cannot move that entire column off the Ace in one move. Therefore the hand is ruined, and you might as well take a score of 35. A Queen-column down can be moved.

The same hand is dealt to all players in a tournament. Otherwise, some would get easy low scores and others high scores, or at least the potential for high and low scores, without any work on the players part.

By starting with identical hands, it is then the strategy, the brain-power, of each player that will make the difference, not the luck-of-the-draw. The game above (Game#25254), at least as I played it, ended with this……another 11 point game. (You will note that 9 of these will get you to 99, which is why I suggest a target of 100 points in a tournament game.) I would imagine that seasoned veterans will often win a tournament by only one point, making for an exciting tournament experience. 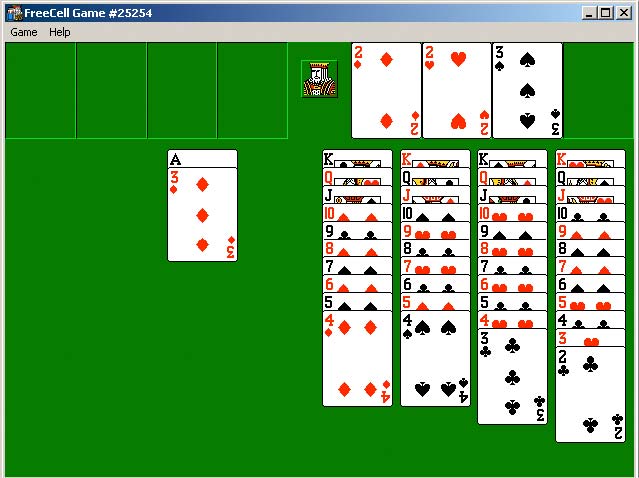 The next ending is pretty bad (total 31 points) but I only show it because it hits all three bonus points, including having the four bottom cards the same value, in this case 6’s of all suits, just to show it is possible.Here’s a better example (15 points): 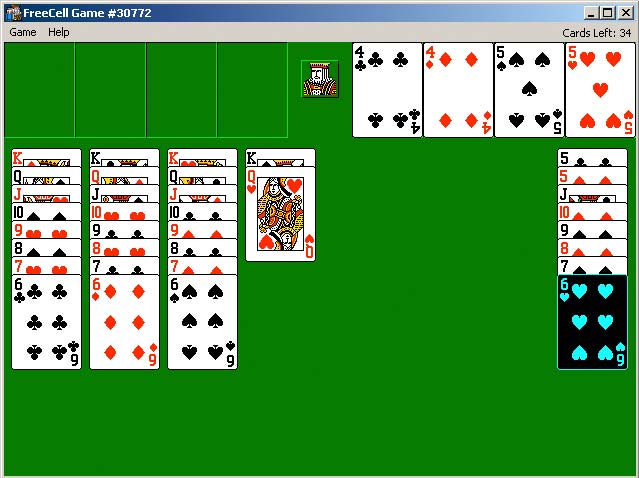 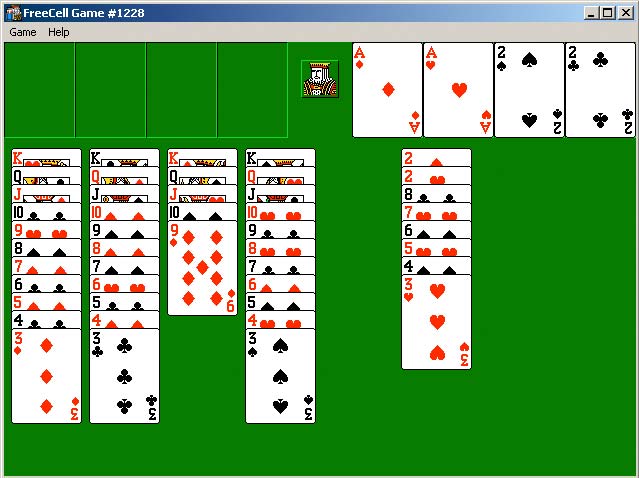 This next game I show only because it is an example where the last card (the 3♦ covering the Ace♠) cannot be played and therefore must be put in the top piles and therefore counts against the player. (Score 18). If the 4♣ could have remained in play, it would have been a decent 11-point game. 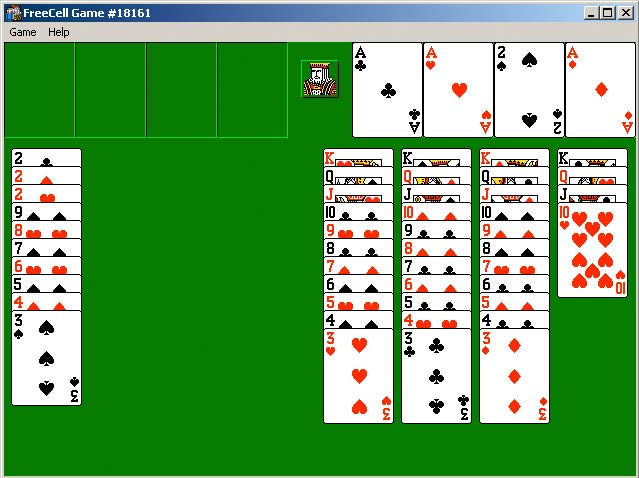 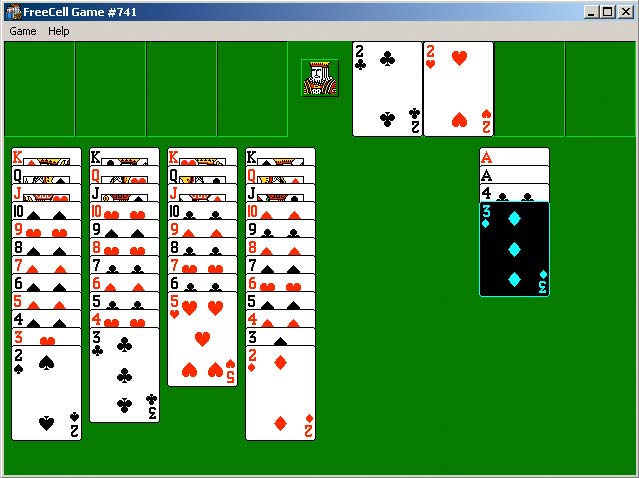 The next example is just a nice score of 10. 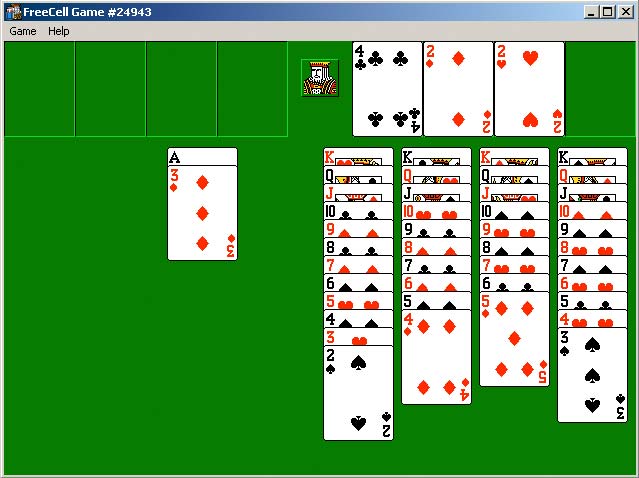 Here’s another 10-point ending. Note that in both examples, two Aces are covered. 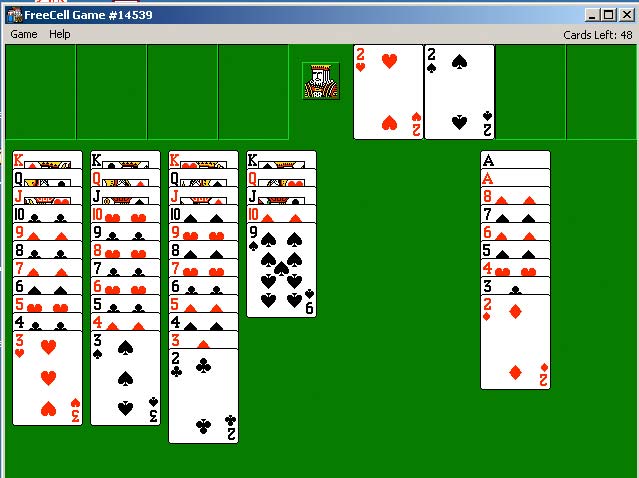 Three aces covered is still only 10 points, as you can see below. 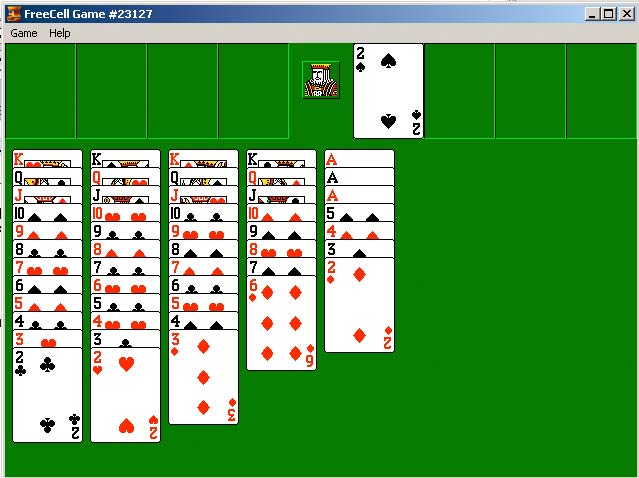 I believe, in a “perfect game” that 9 is indeed the lowest score. In the ultimate game, you would have four aces covered by a 2. That would mean your score would be 2-2-2 and the 2 covering the aces (total 8) plus the four aces covered (12) minus two points for left-right and black-red, minus 1 for all 2’s = 9. So the best score possible is 9. I have never seen such a hand.

Another interesting “perfect” hand is one where the player NEVER puts a single card on the four Freecell card positions on the top left. All the plays and card moves are done within the deck as dealt below. Game #150 is an example. That should have a score of ‘9’ because of the difficulty. 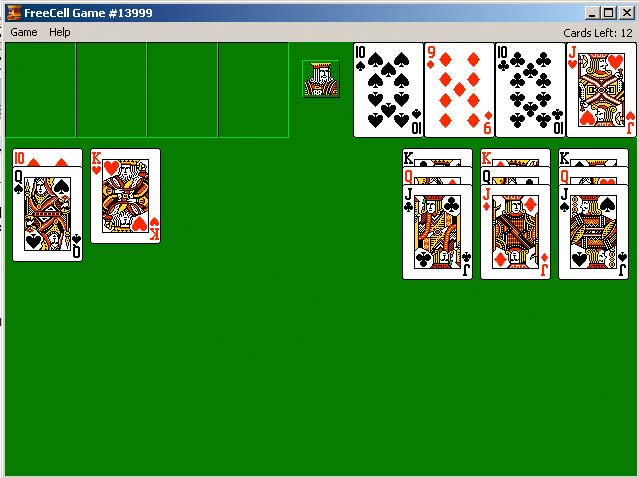 Note that the King at left cannot be put next to the other three or the player will get -1 point for having four in a row and (in this example) another -1 for red-black-red-black, so the total score would be 48, not 50. (The player might as well take a default 35 in that case.)

I am suspicious that a player, given a top row of facecards, can simply discard cards until 50 is reached. That then requires no skill at all, and such way of achieving ‘10’ should be eliminated.

Here’s an interesting end game, with one card up but unplayable. Score 18. 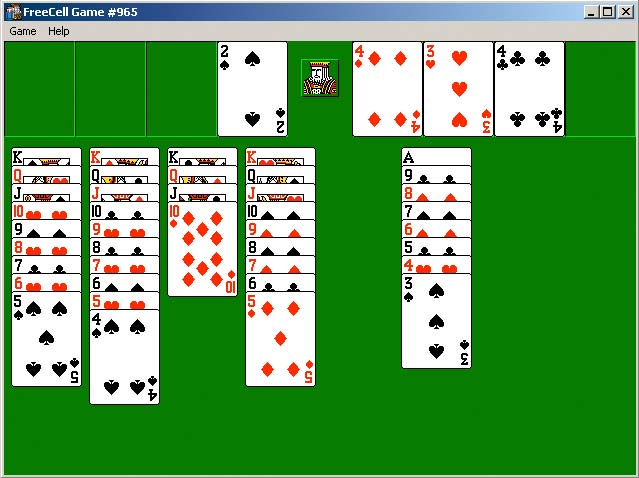 And here’s a rare example of TWO unplayable cards. In fact, this is the only game I’ve seen where there is no playable card to end the game. The only way to end is put the 2♣ up on the freecell row. Again, not played, and scores against the player! 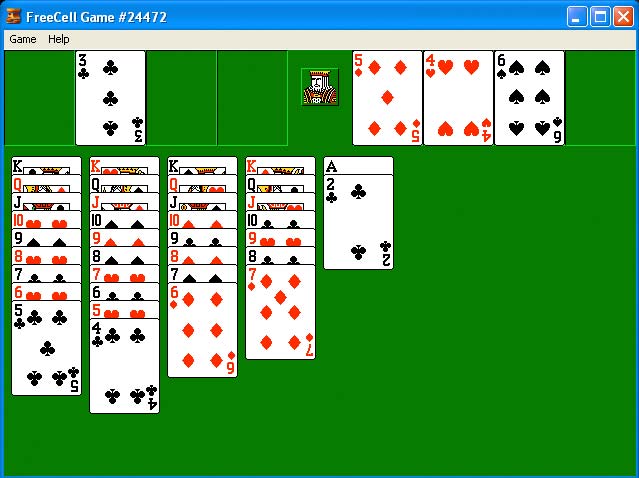 You will note that sometimes it is possible to discard a single card to get a bonus point to get to (in the last game) 3-4-5-6 at the bottom. But the bonus point is cancelled out by the higher score of the game, so that move, to abandon a card, would most often be a ‘wash’. 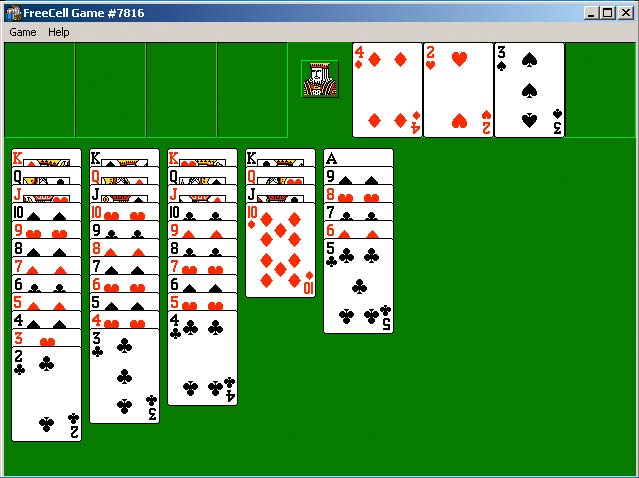 The next example is a very clean hand. Total score 13. 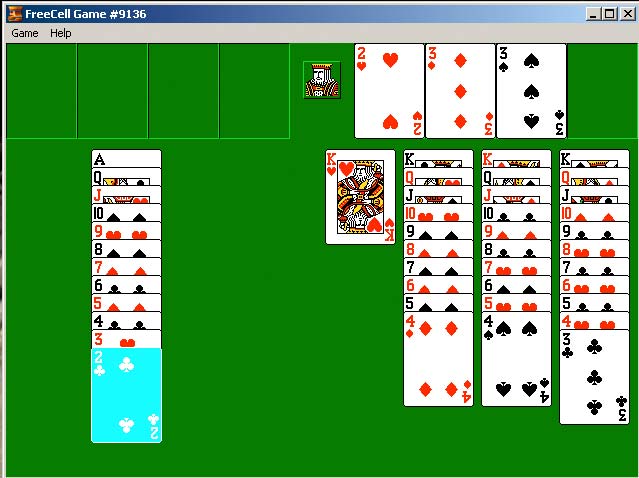 This is one of a very few times I have moved an entire row, Queen-to-2 in one go for the last move. Even though this has an unremarkable score of 12, I think moving an entire row queen-2 is worth another -1 point. (=11) (And a King-2 row is unmoveable in one move, in case you didn’t already know.) 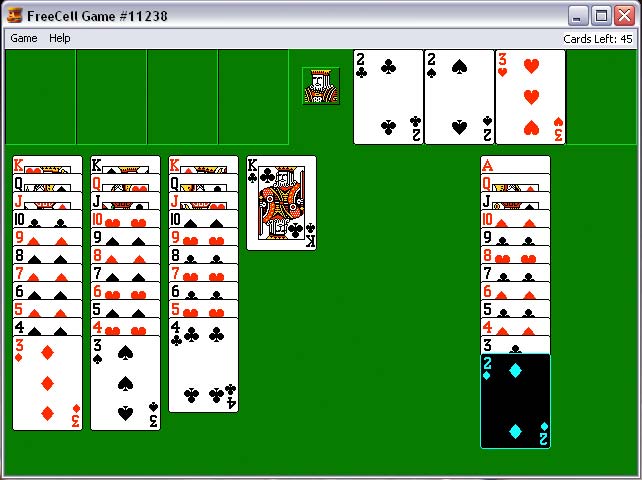 Another exceptional hand would be one where the player never places a single card in
any of the four Freecell spaces in the upper left. Since I wrote this, I have found one
such game, Game #150. Value 9 points, and is included above.

Yet another would be where only four aces appear in the top right row with no cards
played. Is that even possible? I don’t think so.

If this tournament play and scoring takes off, I would love to have my name attached, as
a “Lampen Rules” FreeCell Tournament, perhaps.

Here are some games I found especially challenging:

One the hardest game I ever played and won, 18712, took me three days of play, and
perhaps 50 restarts, to finally win it. Not a pretty win. Not even a score.

But the hardest game ever was 31465. I’ve been working on it for months and months
without a solution of any kind! Good luck! Is it coincidence that this number is almost
pi? 3.14159265.

I recently decided to play every game in order, starting with game 1. It says at the
beginning that you can enter any game number from 1 to 1,000,000. My math wizard
(above) will tell me what the actual number of possible games are. Until then, I am
playing them in order. Occasionally, I put in an “old” number to see if these games
really are consistent. So far, yes, Game #1 is the same game every time. When I get to
Game #1000, I will do an analysis of the scoring of these games. It will be a while, I’m
only up to game #361. Unlikely I will get to Game #1,000,000. Even at 5 games per
day (and I rarely play more than 2), that would be 200,000 days or almost 548 years.
Doubt I will last that long!

Well, it didn’t even last that long. I wrote all the scores in notebooks I carry with me. I
left one on a plane. Someone emailed me from Hawaii and I offered a reward but
nothing was forthcoming. Then Belden changed computers and there was no FreeCell
on that computer, so my project ended there. Shouldn’t stop you!